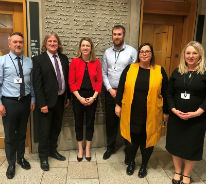 Leven’s MSP Jenny Gilruth this week met with Peter Brett Associates and Transport Scotland to discuss the progress on the Levenmouth Rail Link in the Scottish Parliament. The MSP called the meeting to seek assurances on behalf of her constituents.

Transport Scotland confirmed that a full report will publish this month, with the final steps in the process taking place in May. A recommendation will then be sent to the Scottish Government for a decision to be made on whether or not to reinstate the Rail Link.

Jenny Gilruth MSP’s members debate in September 2017 led to an assurance from the previous transport minister, Humza Yousaf, that the options appraisal be taken forward. Since then, Leven’s MSP continued to press the case for the line’s reinstatement – through parliamentary questions and in debates. Commenting after the meeting, Jenny Gilruth said –

“I am grateful to Peter Brett Associates and Transport Scotland for agreeing to meet with me in the Scottish Parliament this week.

Increasingly my constituents have been expressing their frustration at the length of time this appraisal has taken – I think when you consider the rail link has already been subjected to two STAG appraisals, that frustration is understandable.

It’s important, however, that the same process is followed for all new rail lines across Scotland – which is what this study is all about. Having campaigned on this issue before my own election and throughout my time in Holyrood, I continue to believe reestablishing Leven’s rail link would be transformational for my constituency.

I look forward to the results of the final study when it publishes in May and I will continue to do all in my power to ensure the Scottish Government listen to the needs of my constituents and commit to the Levenmouth Rail Link.”

During the meeting, Peter Brett Associates summarised the Transport Study, which was commissioned by Transport Scotland on behalf of the Scottish Government. As well as issues of safety, the environment and the economy, the local social impact was also considered and seen as a vital indicator of the railway development.

Peter Brett Associates explained that in the creation of their plans, new technology was being utilised and Transport Scotland officials maintained that this new technology would be able to provide a robust evidence-base for decision making and address concerns Scottish Ministers have had over previous studies.

UK GOVERNMENT MUST ENSURE A SECURE FUTURE FOR POST OFFICES