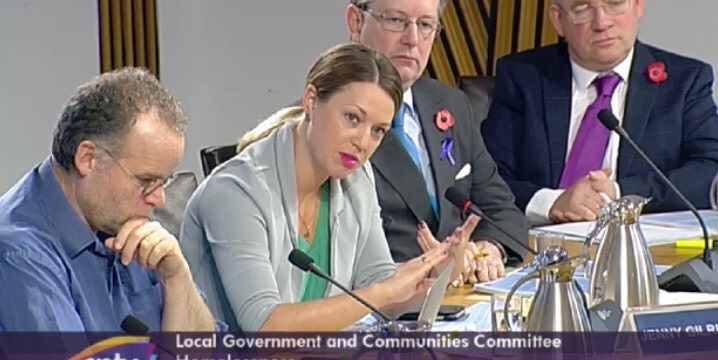 Jenny Gilruth MSP has hit out at Councillor David Ross, in a frustrating exchange of questioning in front of Holyrood’s Local Government Committee.

Councillor Ross was giving evidence as part of an inquiry into the City Region Deals. Fife is unique as a council area, in that it straddles two city region deals – with North East Fife being carved up as part of the Dundee deal – whilst the rest of the Kingdom has been lumped under the deal agreed for the capital.

Councillor David Ross joined partners of the Edinburgh and South-East Scotland City Region Deal, that was signed on 20th July 2017, to explain Fife Council’s input into the Deal.

Ms Gilruth took the Fife Council Co-Leader to task for a serious lack of projects noted within the City Region Deal that will benefit Fife. The Fife MSP commented:

“Fife has been let down by the Edinburgh City Region Deal. Plans to reinstate the Leven Rail Link should have been the number one priority for Fife Council in these negotiations. I remain in the dark as to whether that was ever the case.

David Ross’s evasive answers to a direct line of questioning in front of the Scottish Parliament’s Local Government Committee leave me deeply worried about how Fife Council prioritised projects in the deal”.

Ms Gilruth wrote to all three levels of Government in August. The MSP received replies from the Secretary of State for Scotland, David Mundell MP and from the Cabinet Secretary for Economy and Fair Work, Keith Brown MSP. No formal written response has been received from Fife Council.

Councillor David Ross refused to provide the Committee with a direct answer when asked if officials had blocked the inclusion of plans surrounding the Leven Rail Link within the City Region Deal.

When asked by Jenny Giliruth MSP why he had signed off on the deal on 20th July 2017, before claiming the deal was ‘deeply disappointing’ only 6 days later in Holyrood Magazine, the Co-Leader stated that “I think the two things are not necessarily contradictory”.

Ms Gilruth had previously issued a press release on the 24th of July lambasting the fact that the Levenmouth Rail Link had not been included in the deal, calling it a ‘missed opportunity’ for her constituency. Commenting after the committee meeting, the MSP stated:

“I will now be writing to the leaders of all the Council’s involved in the Edinburgh City Region deal, to ascertain how authorities were asked to contribute their demands. If it is the case that Fife Council did prioritise certain projects over others, then we need answers – why was Fife Council not championing the Levenmouth Rail Link when it counted?